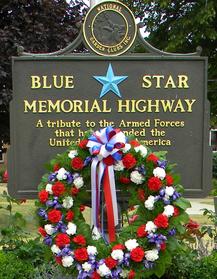 evidencing our National gratitude to members of the U.S.

marking program in 1945 after World War II. Each highway

plaque bears a recognizable Blue Star in the center. This design incorporated the same Blue Star used on service flags that a family would displayed to denote its member serving in the Armed Forces during conflicts. All Blue Star Memorial Markers are sponsored by local Garden Clubs, and can be seen in the National Cemeteries and parks, at Veterans Facilities and National Veterans Monuments, and along designated highways and byways. The Blue Star Memorial Marker of Antioch is located at the intersection of Main Street and Depot Rd in the shadow of the Lakes Region Historical Society building. This marker was procured in 2008 by the Antioch Garden Club, with financial assistance from the Antioch American Legion. A Blue Star Garden has been planted and maintained solely by members of the Antioch Garden Club since then. A rock planter surrounds the Blue Star Highway Marker and encircles an engraved plaque bearing witness especially to Antioch Veterans. Two large spotlights illuminate the flags and Marker throughout the year. Currently the Garden is graced with 3 Veteran’s Honor Roses and 2 International Peace Roses, along with Lavender and annuals. Every November 11th-Veterans Day,  the Antioch American Legion Post #748 and members of the Antioch Garden Club, co-host a memorial service to honor all Veterans for their sacrifice, dedication and service to our country.